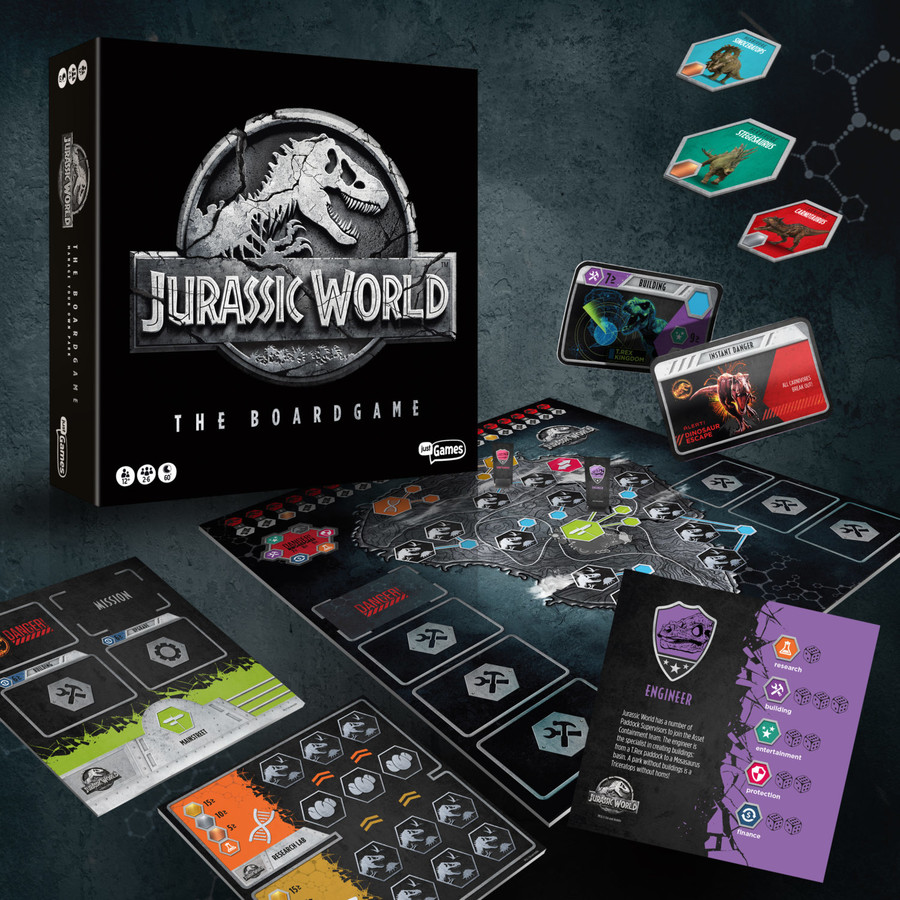 Contents
All the necessary boards, chips and cards look awesomely designed, feel sturdy and simply look like something very qualitative. The dice are simple and the holders for the different pawns look a bit basic as well, but they certainly do the trick. While everything in the box looks spiffy and somewhat expensive, we were simply enamored by the Hammond marker, which is a small white pawn in the form of the legendary character from the original trilogy. Kudos to the developers for adding this pawn to the game.

Mechanics
When flipping through the rulebook, you’ll probably be taken aback with many pages filled with information, which might scare you off into playing this title. Nonetheless, when you get going, and follow the book step by step, it’s easy to finally get into the flow of the game and ponder about yourself being a pussy for ever wanting to back out of playing this title. When you finally get going, you’ll have to work together in order to build your own Jurassic World theme park by digging up fossils, researching DNA strains, placing dinosaurs in the park, buying buildings to up your entertainment value, all while trying to keep your not-so-extinct dinosaurs in their cages. We can immediately tell you that this two to six player game is the most fun with the biggest possible group, as it requires proper strategy, planning and you’ll simply get a lot more done than when you opt for a two player game, which doesn’t really have any adapted rules to take in the fact that your player count and amount of actions per turn is extremely low.

The flow of the game takes some time getting used to, as during the planning phase, everyone will have to pick their position on the game board, ranging from digging up fossils, researching new species, to placing dinosaurs in the park, buying buildings to acquiring upgrades for your character. When everyone has picked their location, you can give the Hammond marker to the player that will start off the turn, with the rest of the players following in the direction of the clock. Not only is the Hammond player the first to play his turn, but he/she will also have to roll the dice when the danger clock switches position. This danger clock will, if you throw high enough, do nothing, but in case you miss the dice roll, you will have to draw a danger card. This card can cause a lot of trouble with dinosaurs breaking loose, buildings going inactive etc. Every few turns you’ll have no other option than to pick a danger card. Every danger situation, the danger meter runs up, and if it’s full before you reach your missions goal (easy, medium, hard) you and the rest of your party will fail. Missions are basically simply a directive to get a specific amount of dinosaurs in your park, consisting of specific races and you’ll also have to get your entertainment level to a certain predetermined figure.

As mentioned before, everyone chooses their role in the park, depending on the character cards. All of these characters (safe for one) will have a specific ability in which they excel. This translates in the usage of more dice than the other characters. For example, the director has great finance skills, thus when digging up fossils, corresponding with the finance skill, he is allowed to throw three dice, making it a lot easier to dig up fossils, as you will have to throw a minimum of eight for the cheapest fossils. Sadly, if you want to have him build buildings, he can only throw one dice, so he will probably end up being useless if you put him in that position. This means that if you play with more players, you’ll be better in assigning players to the different parts of the map, compared to when you’re playing a two player game, and you’re constantly stuck throwing low numbers.

Luck or Strategy?
While games involving dice throws always count on a high luck factor, Jurassic World: The Boardgame actually combines the best of both worlds. The more players joining in on the fun, the more planning it will require to properly get things done during your turn, especially considering who will start the turn (the one you pick that gets the Hammond token). Of course, your careful planning can go to waste if several players get a low roll on their dice throws, but still, you can get a lot of things done with some consideration on how the next turn should be played during your planning phase. 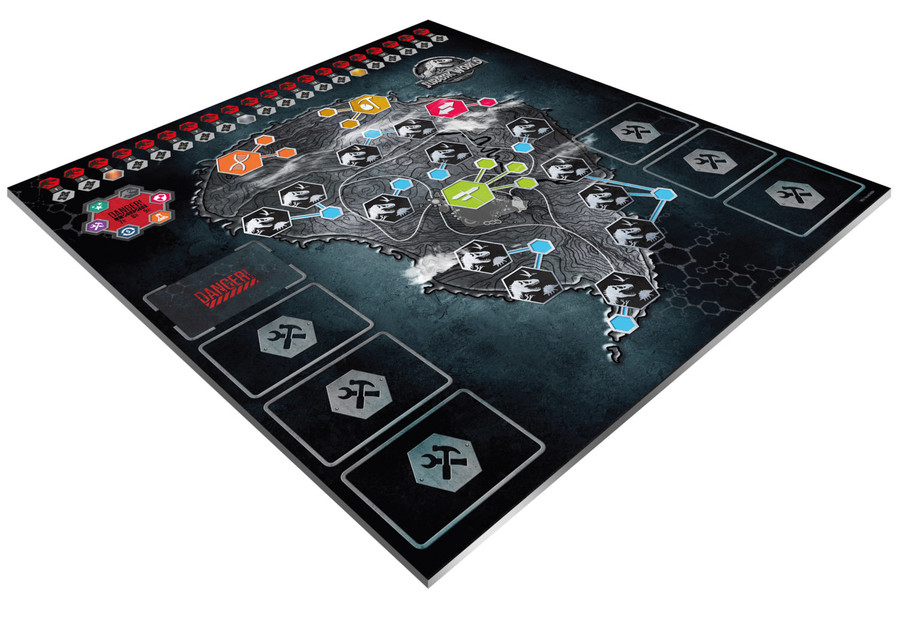 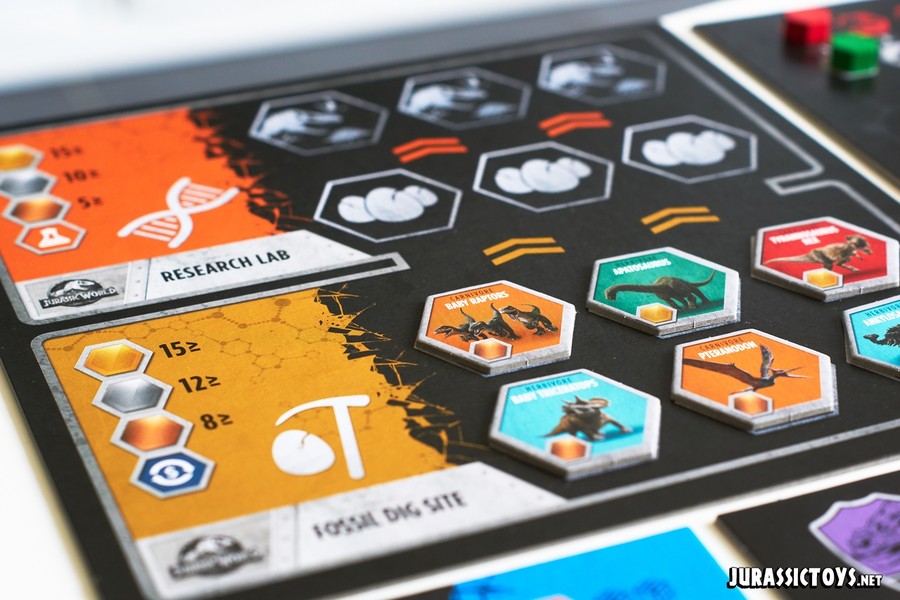 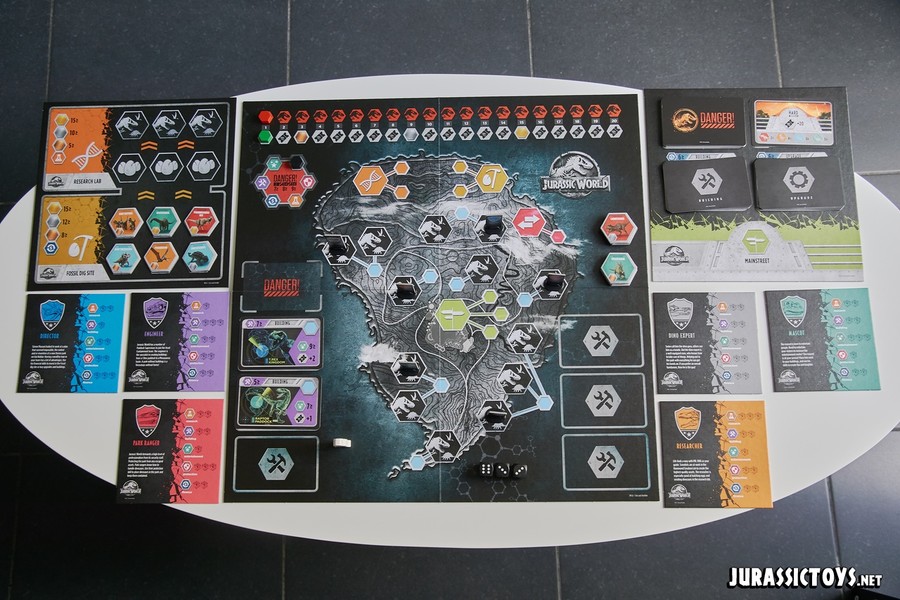 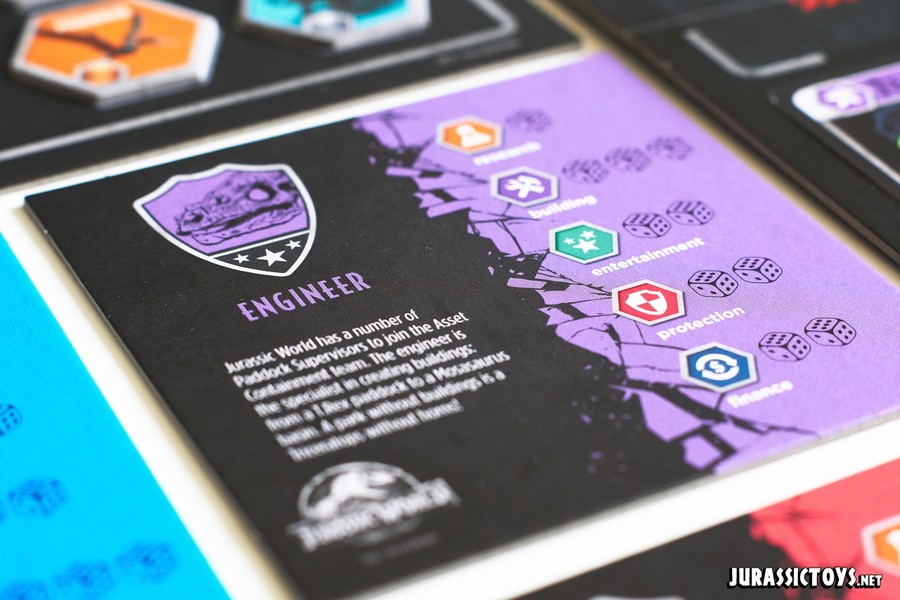 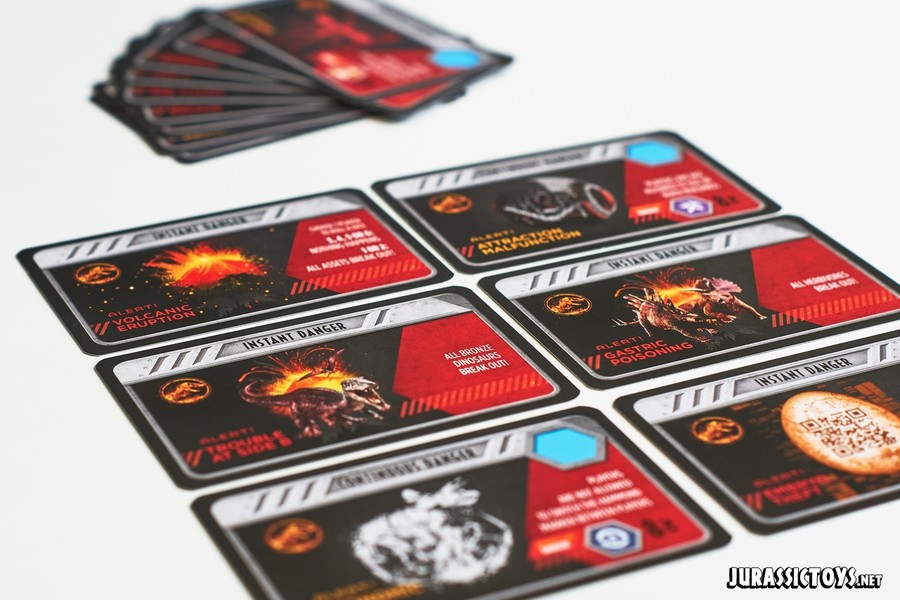 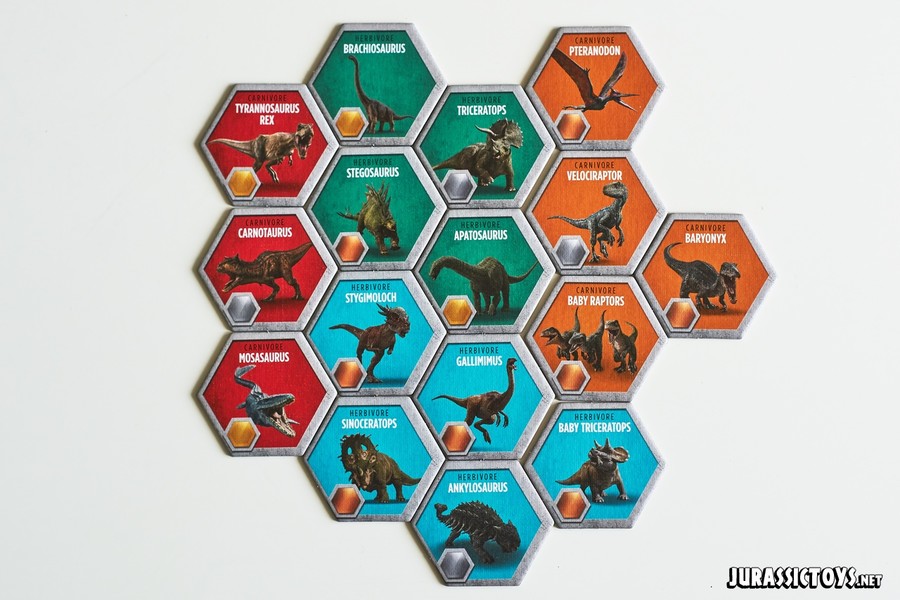 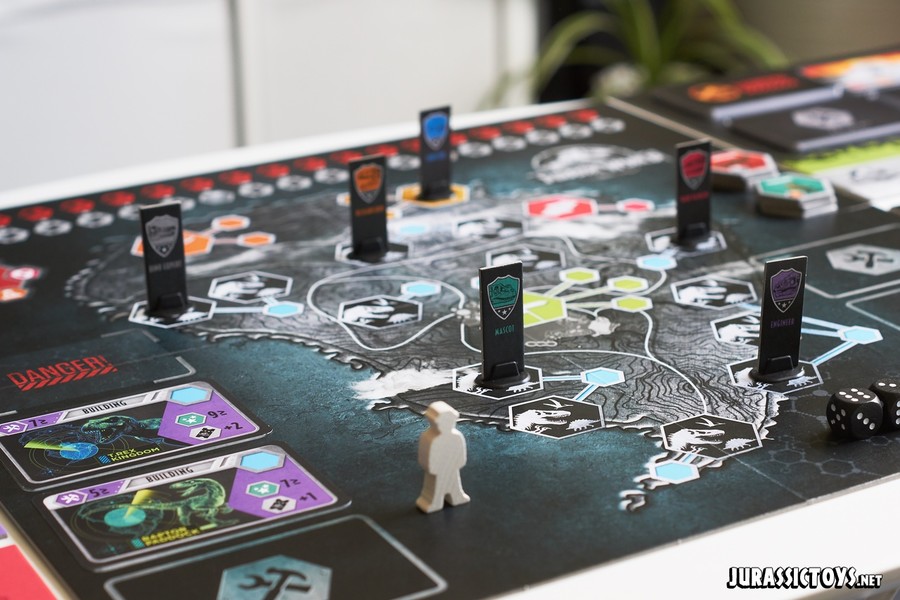 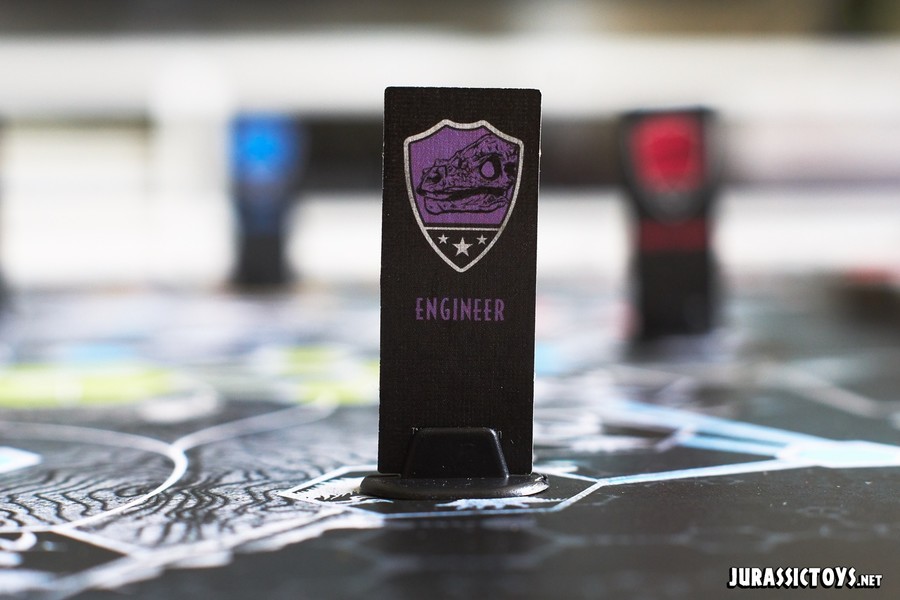 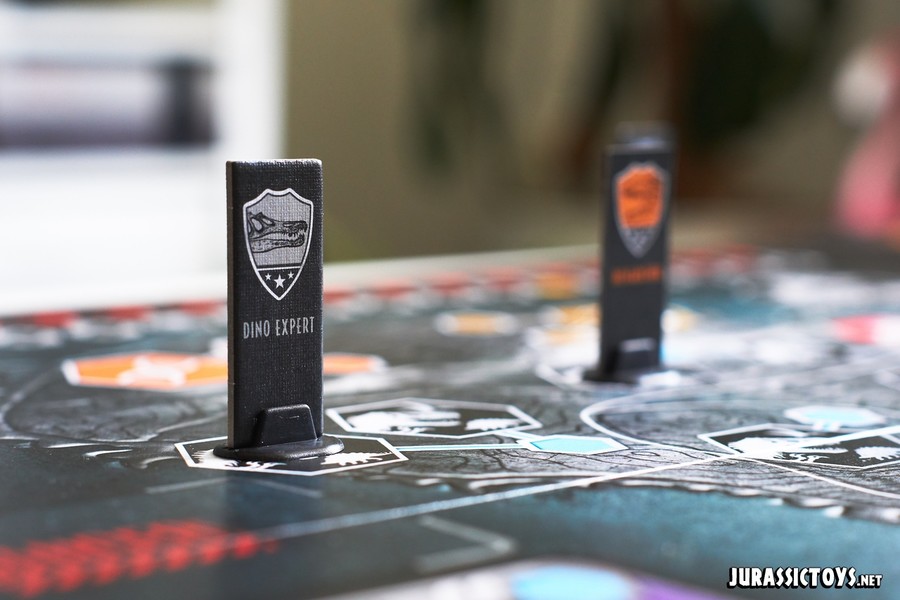 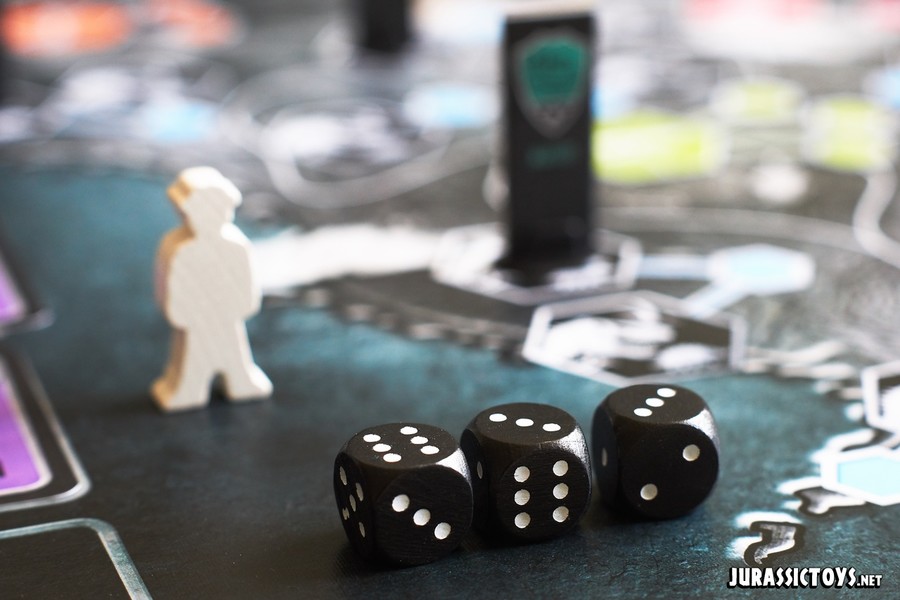 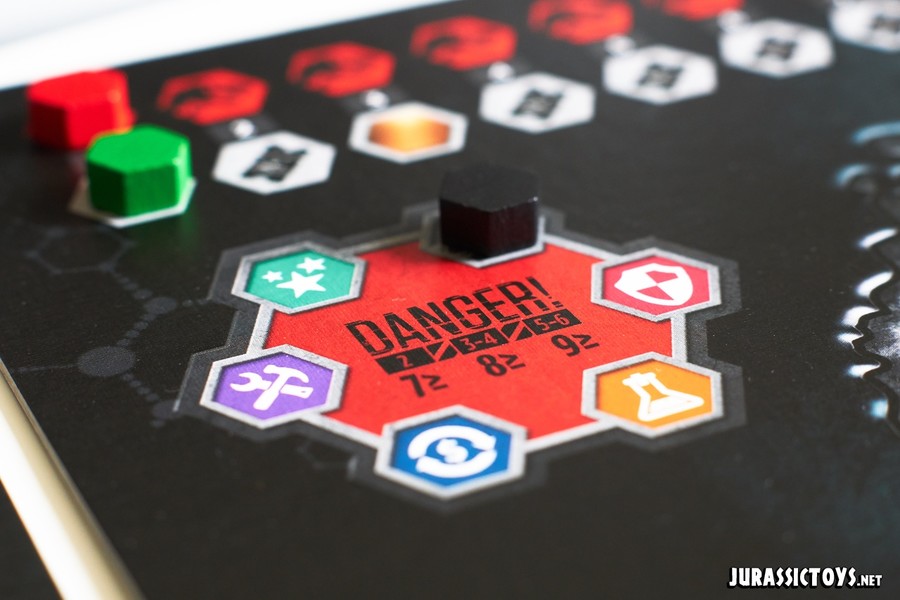 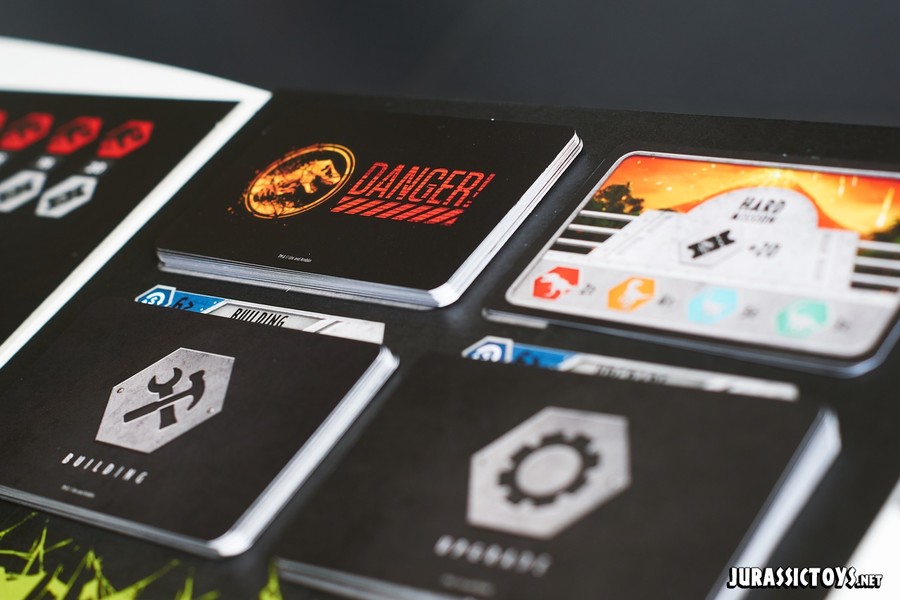 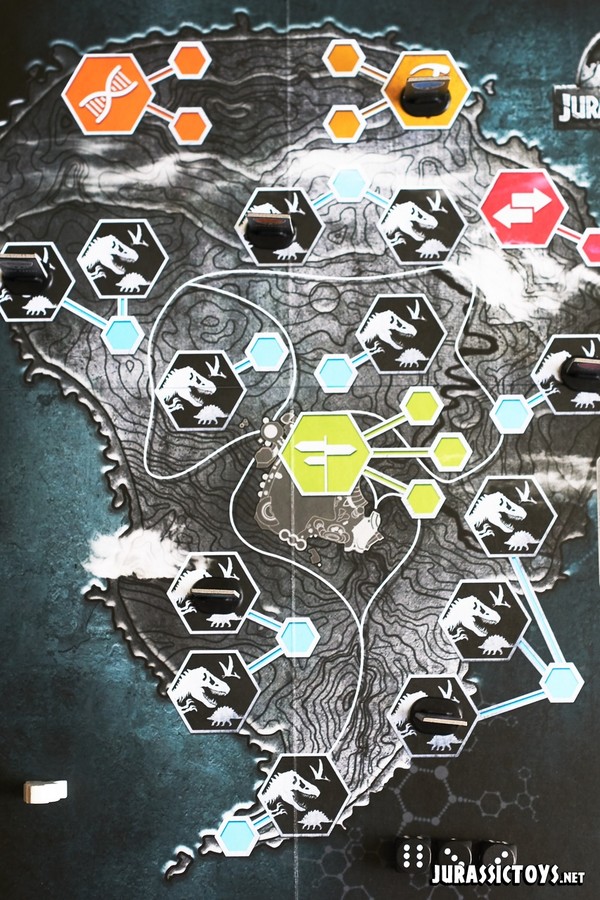 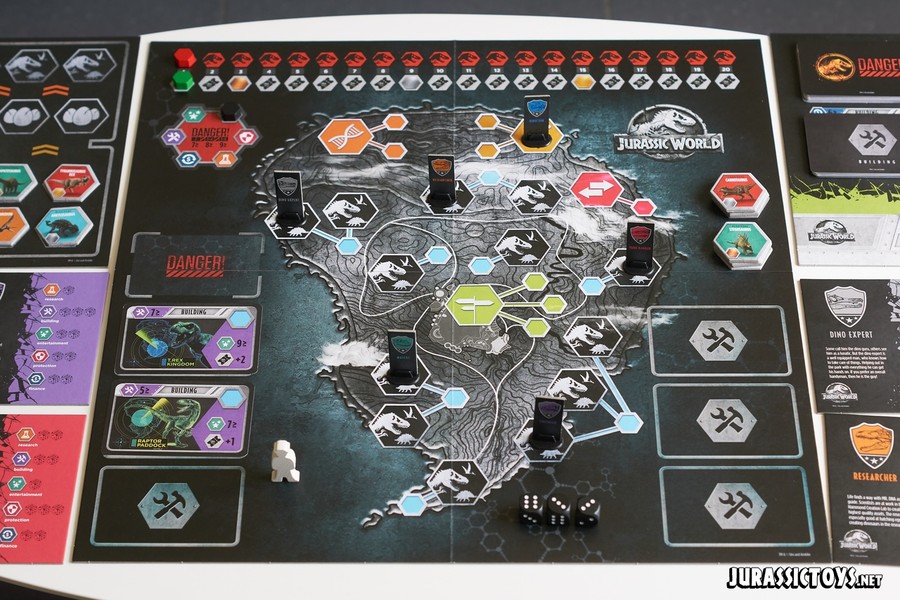 Vidéo How To Play 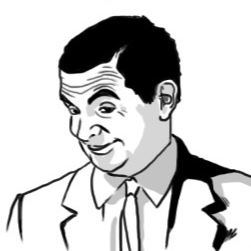