Prepare for invasion! Robotech RPG Tactics is a tactical miniatures game set in the Robotech universe. While the 1/285th scale game pieces can be used as a companion to the Robotech RPG, the game system is designed to be played as a tabletop miniatures game. Players build armies of multiple squadrons of mecha to fight it out in scenario-driven, objective-based game play. Take command of the fighting forces of the United Earth Defense Force (UEDF) valiantly defending Earth from alien annihilation – or lead the massive clone armies of the Zentraedi Armada to recover an alien artifact of immense power and enslave humankind. Depending on the faction, and their choice of mecha, a player's army may include anywhere from two game pieces to as many as you desire! The rules are scalable from small skirmishes to mass combat with hundreds per side.
Robotech RPG Tactics uses a dynamic turn system. Players trade off activating squadrons during each turn, ensuring that a player never has to sit and wait while his opponent moves and attacks with his entire army. By using alternating activation of squadrons, the game's action unfolds at a fast and furious pace, allowing large scale battles to be easily carried out in a single evening. Each player receives a number of Command Points each turn based on the number of mecha they have on the field, and the quality of their officers. Command Points are spent throughout the turn on maneuvers such as boosted movement, devastating weapon salvos, breakneck dodging counterattacks, and potent special abilities.
The wide variety of mecha in the boxed game bring to bear the myriad and awesome weapon systems from the Robotech universe to lay waste to your foes. Even the battlefield itself can alter over the course of the game as buildings are leveled by destruction unleashed during the battle.

No award found
Give your opinion on this game! 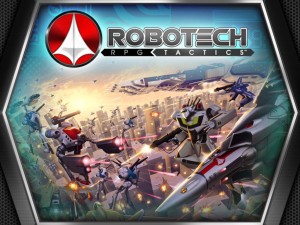